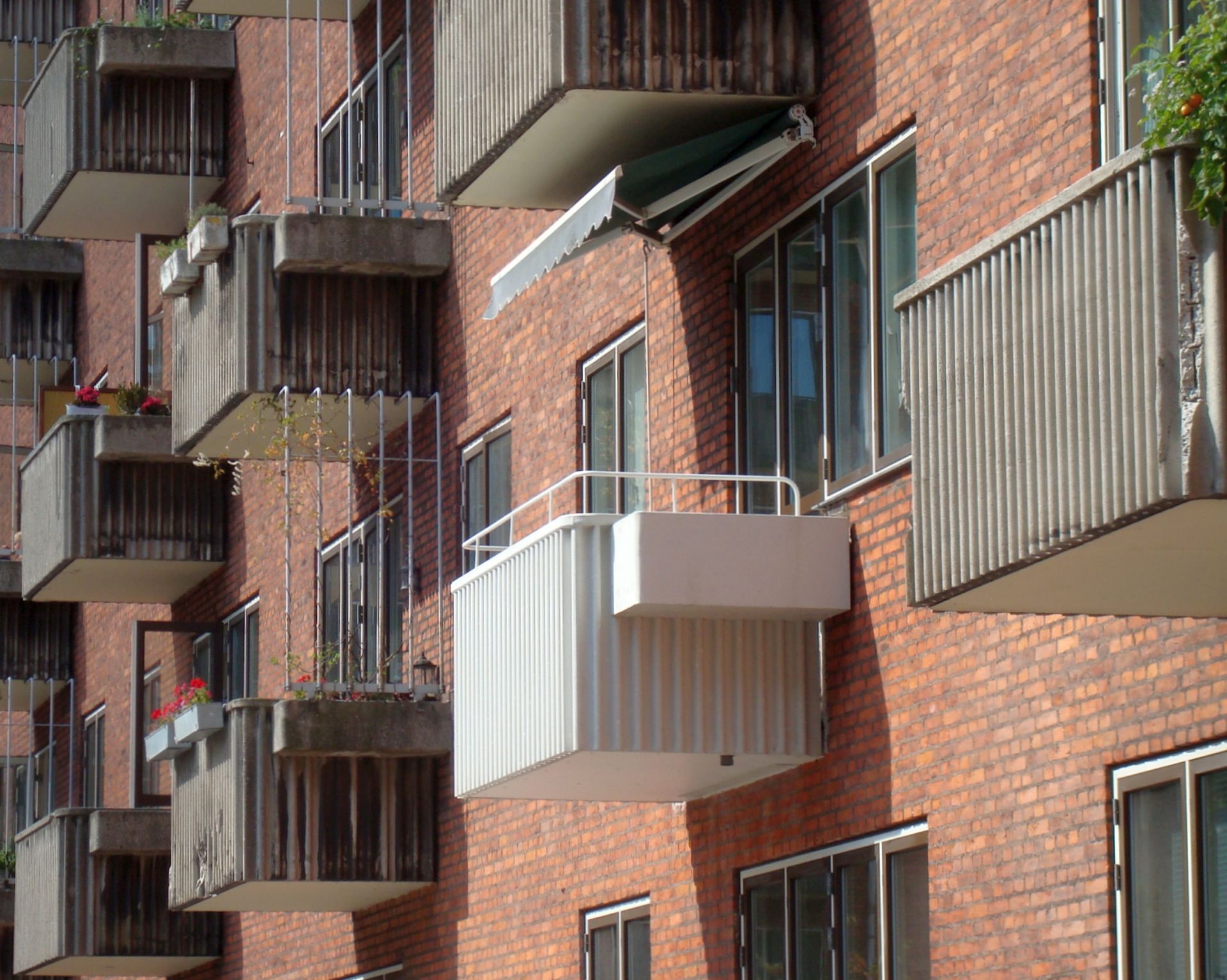 A mock-up balcony on an old building installed using a glued connection: Ved Volden in Copenhagen. Notice that a strip of light is visible between the new balcony parapet and the wall except at the bottom where the connection to the deck is revealing that the parapet is not part of the load carrying system.

In many of the previous blogposts we have shown different ways to use UHPC, but most of the examples have been new build projects.

In his blogpost on the experiences from introducing UHPC to the Dutch market, Edward Verschoor showed some of the largest projects with CRC i2® in Holland, and these were renovation projects.

So, in three blog posts – this being the first - I will illustrate some of the benefits, but also the challenges of using UHPC for renovation projects. This first post in the miniseries will address glued connections of balconies. But first a brief introduction to renovation projects in general.

All renovation projects are difficult:

All this leads to a cost/benefit assessment for the building owner, between renovating or tearing down and building a new structure.

In some cases, the building is protected for historic or architectonic reasons, and in these cases the only option is to renovate it – or restoring it. It can be possible to repair the structure, but in many cases, this only buys time – it does not really solve problems with the structure, indoor climate or whatever else may be the reason that resulted in a need to renovate the building.

When considering renovating, extending or adding balconies to an existing structure, the reserve of unused structural capacity is essential, and in this respect, the building type is important.

Newer buildings in concrete or steel will often have some excess capacity and are rarely subject to protection, leaving several options for attachment of balconies open.

But older brick buildings (from the 1930’s and 40’s or older) have the general challenge that the walls cannot support much load – both vertically and especially horizontally, and so if exterior columns cannot be used, only the deck is available for attachment to the building.

If the deck is made of concrete, then existing balconies will have been made by in-situ casting an extension of the deck out as the balcony slab. This is the building type I focus on in this blog post.

What is a glued connection

In principle most connections are glued to some extend: Most brackets are fixed using ‘chemical anchors’, which is just another way of writing ‘piece of threaded steel glued in drilled hole’ that sounds more solid somehow.

So, when only using threaded bars and glue without the brackets, it is basically just applying many chemical anchors as the only means of fixation. But for some reason most people look at you like you should have your head examined when you tell them you have glued a balcony to a building…

When all force is to be transferred via the deck, the first thing to do is to establish the condition and capacity of the deck. The original drawings will normally give you the intended geometry and reinforcement layout but will tell you nothing of the actual structure in place, or the state of the old concrete and reinforcement. Hence the only way to accurately assess the capacity is to test it. 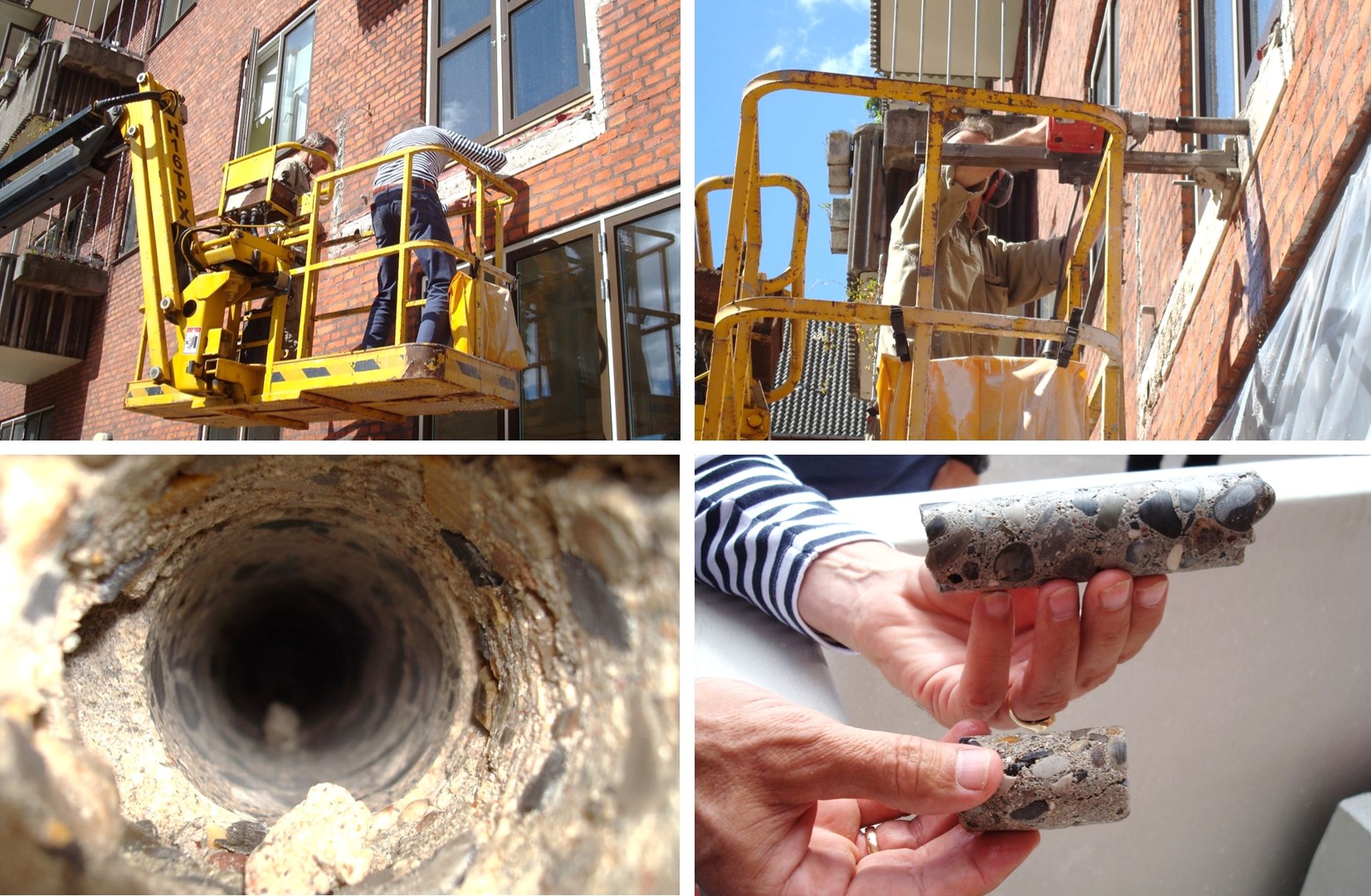 Investigation of an existing deck after cutting the old balcony down: Visual inspection (top left), drilling of sample cores (top right), Visual inspection of the drilled hole (lower left) and the core after extraction (lower right). The core broke in two.

In this case it was found that the original cast had been made in two steps, with the second (outer) layer being porous and the first (inner) deck cast being denser and in good condition. In places the outer layer could be removed with a spoon …

Below an overview image also showing the old drainage pipe to the left. This was supposed to be to the right according to the original drawings ….. 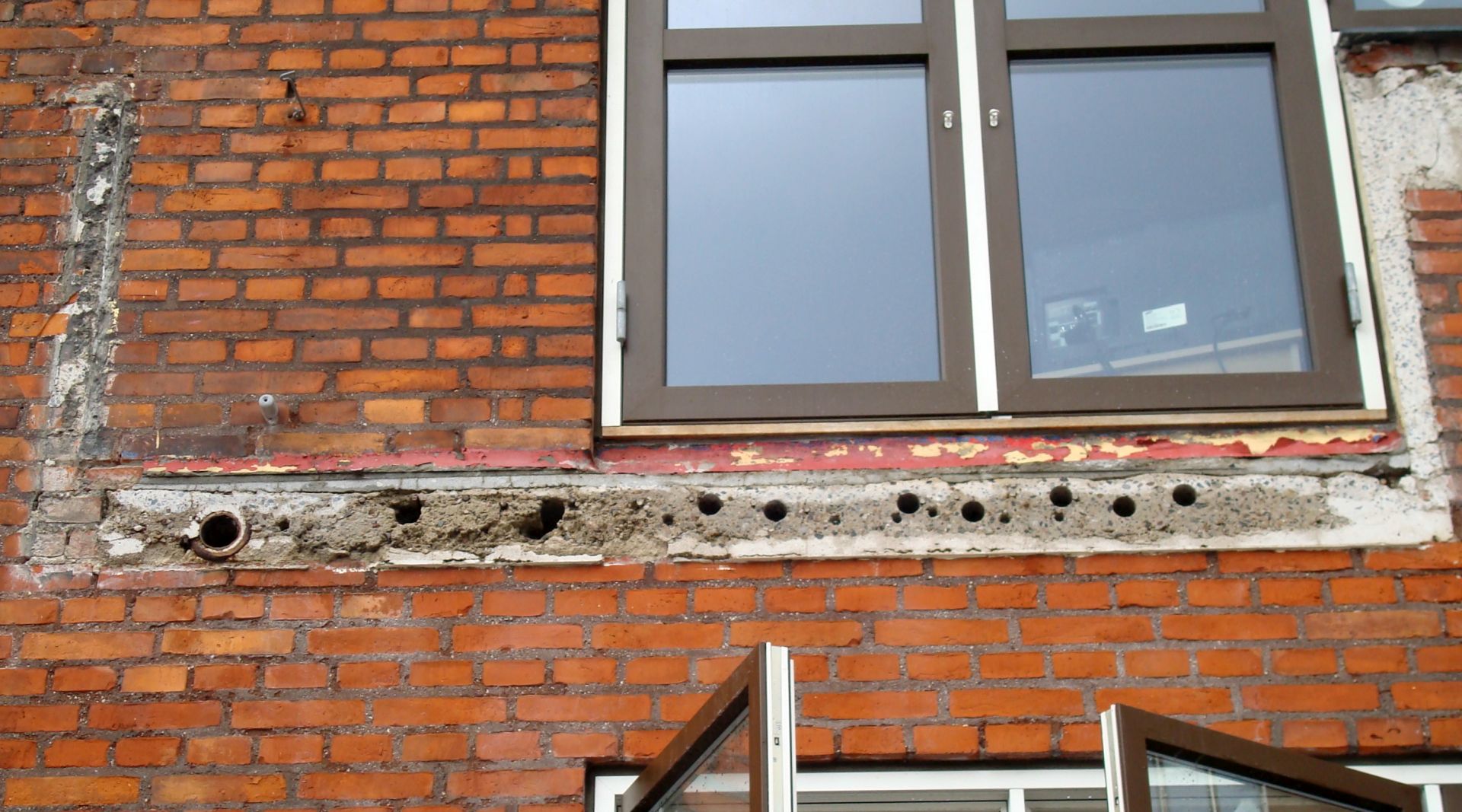 The main problem with an old structure looking like that is that it is very hard to define in advance where connections are possible. This is especially difficult when using pre-cast UHPC because it is not possible to make a quick decision to move an anchor 5 cm to the right or left, on the building site. The anchors are already placed in the pre-cast UHPC element. This would be significantly easier if the connection had been in-situ cast, but in-situ casting is not a good option for UHPC, given the very narrow tolerances and sensitivity of the mix.

Another issue is that the UHPC is capable of exerting high stresses to the older concrete in the compression zone, which in many cases is too weak to support them in concentrated form, so a pressure distributing layer between UHPC and original deck may be required – in the case above it was even necessary to remove some of the porous layer in advance, and use a high strength mortar cast between the old deck and the UHPC balcony to handle tolerances and form a new compressive zone.

A third challenge with glued connections is tolerances:  to be able to insert the threaded stainless-steel bars into holes drilled in the deck, the holes need to be over-sized, and only a few – and relatively costly – resin types are shrinkage compensated long term and can be used in this way. And these types normally do not harden very fast, so temporary support for several days is normally required.

So, with all those challenges – why bother?

First and foremost because in the relevant cases, there is no real alternative.

When a concrete element is needed – for aesthetic or other reasons – there is a major problem replicating the old structure in regular concrete, because the standards and norms have changed dramatically since the building was first designed.

Consequently, it is not possible to cast a new copy of the original balcony – it would not live up to the requirements of today. With UHPC it is possible to create elements with much lower weight than the original, compensating for the increased live loads.

Below the assembly sequence of the hollowed-out and thin-walled UHPC version of the original balcony at the project Ved Volden in Copenhagen. 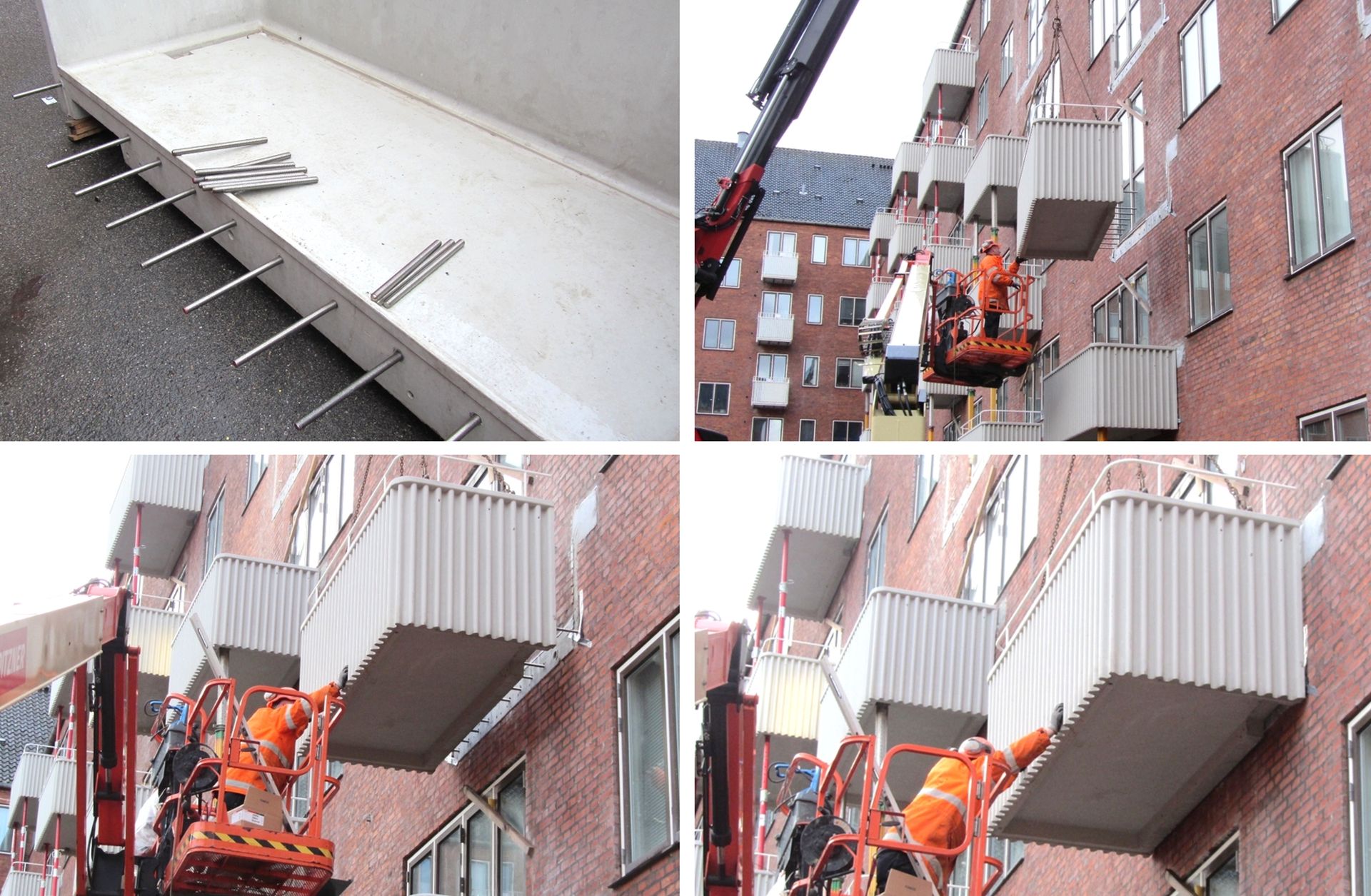 Below another example that illustrates the challenges with glued connections from Marielyst in Gladsaxe. In this case, the main bars of the reinforcement in the old deck were situated in exactly the place where the glued connections were placed, resulting in the need to test load all balconies after installation. 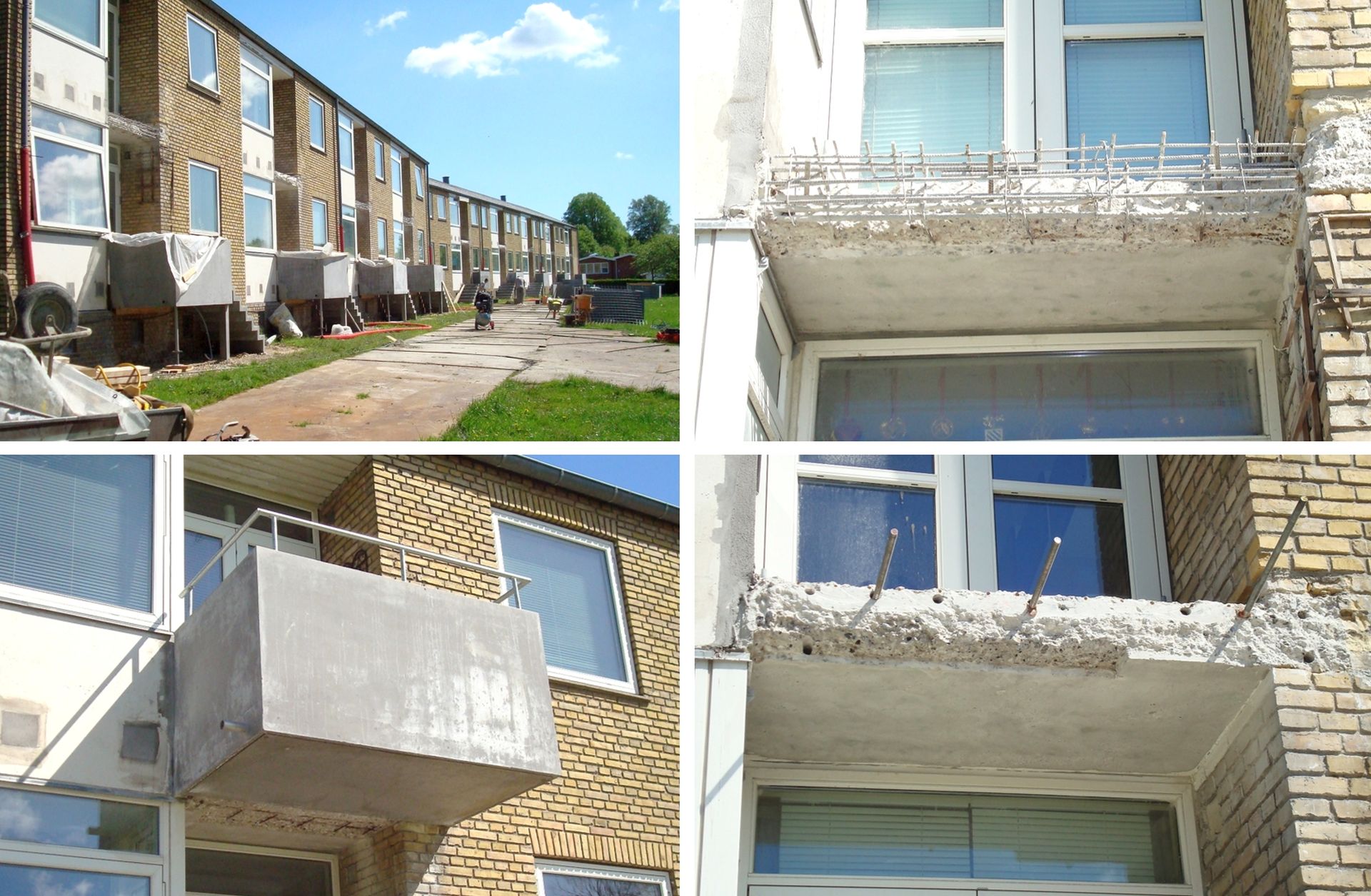 Marielyst in Gladsaxe: Overview after cutting the balconies down and installing the new ground floor balconies (top left), A severely damaged old deck after hammering away the damaged concrete (top right), and a deck with a better condition showing anchors used for test loading (lower right) and finally a balcony after installation with reinforcement in the old deck visible at the underside (lower left).

Summarizing, the combination of glued connections and lightweight UHPC balconies can be the difference that makes renovation possible in some extreme cases, but definitely not without challenges:

As renovation principles go, glued connections are by far the most complex and demands a lot of pre-planning, documentation and pre-approvals, risk management and creative thinking and on-the-fly problem solving in both the design and construction phase.

So this is just how we like it at Hi-Con: Challenging and complex, and therefore highly rewarding when we succeed together with our cooperation partners !!