I am often asked why we use fibres, since we also use conventional rebars. The answer is crack-control and ductility.

Ductility was one of the key elements when Hans Henrik Bache developed CRC in 1986. The high strength matrix had already been developed some years earlier, when he invented and patented DSP-materials (Densified Cement/Ultra-fine Particle materials) in 1978 – what later led to the start of the Densit company. With the development of CRC, closely spaced reinforcement was combined with a high-strength matrix with stiff, strong fibres making it possible to achieve a behaviour like steel, but using a concrete – with the advantages that provided with regard to durability, fire resistance etc. The fibres provided “local” ductility, while the closely spaced reinforcement provided “global” ductility by acting as a stiff frame. This divided the fibre-reinforced matrix into small “cells” each capable of multiple cracking. Bache’s drawing of his proposed system is shown below. 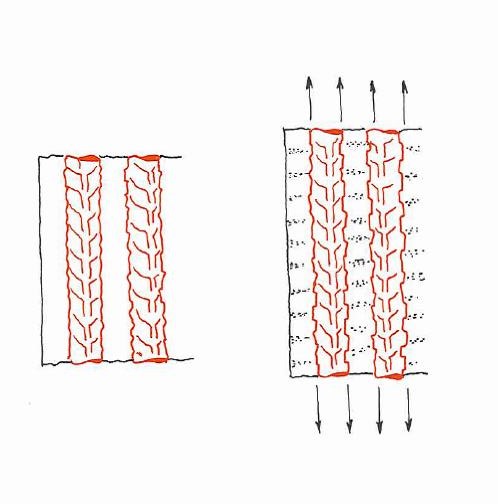 Using very high fibre contents (up to 12 vol.% - or more than 900 kg per m3 - of very short, thin fibres) and very closely spaced reinforcement it was possible to achieve results that were quite exceptional. An example is shown in the picture below - the result of a test performed together with the Swedish military, where a grenade was fired at slabs of 20 cm thickness. 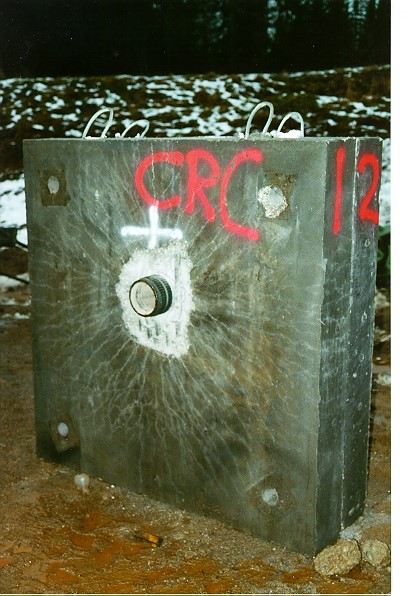 Today we use a scaled down version of Baches design. We typically don’t produce the kind of products, where performance like what was achieved in the first tests is necessary, so we have reduced the fibre content and scaled down on the reinforcement to improve workability and reduce cost of the material. Ductility, however, is still very important for all our products, so that we can achieve multi-cracking and maintain a very small crack width. This again gives us some minimum requirements with regard to fibre content and distribution of reinforcement. The effect this can have is perhaps best illustrated by 2 videos taken at University of Ottowa. Professor Hassan Aoude from Ottowa has carried out several projects using a shock-wave tube to simulate explosions and test the response of different types of elements. Several papers have been presented – and I should mention that he and two of his students (Sarah de Carufel and Christian Melancon) received a Best Paper Award at the UHPC-symposium held in Des Moines in July, 2016 for their paper on one-way panels tested in the shock-tube (link below for those interested).

The two videos were made as part of a test on seismic design, and they compare an SCC with no fibres to a CRC mix with fibres. As you can see in the videos, the behaviour of the two columns is very different even though both columns have exactly the same reinforcement - including closely spaced stirrups. The response of the columns go from a local failure with the SCC to a global response with the CRC mix.

Watch the behaviour of the two columns:

SCC with no fibres
CRC mix with fibres

We would have appreciated being able to do shock-tube testing as part of our standard-testing (specimens fail in such an impressive manner), but unfortunately we don’t have that kind of equipment available and have to settle for more simple tests. We use the EN 14651 test (4-point bending on a notched beam) as our standard test.

As I have mentioned in an earlier post, this test is not particularly well-suited for our type of concrete as we have very short fibres, but it provides some interesting information with regard to the effect of our fibres. We have a few basic requirements for behaviour. The LOP (Limit Of Proportionality) should be relatively high – and in the test it is specified as the maximum stress below a crack-opening of 0.05 mm. Also the fR,1 – the stress measured at a deformation of 0.5 mm – should be higher than the LOP and the ratio of  fR,3 (stress at a deformation of 2.5 mm) to fR,1 should be higher than 0.7. Apart from the values used in the test itself, a rough approximation of fracture energy based on the area under the curve is also useful. Other than that, there can be a big difference in behaviour and we use this type of test as an initial screening of fibre types and contents – and follow up with different tests where rebars are included. 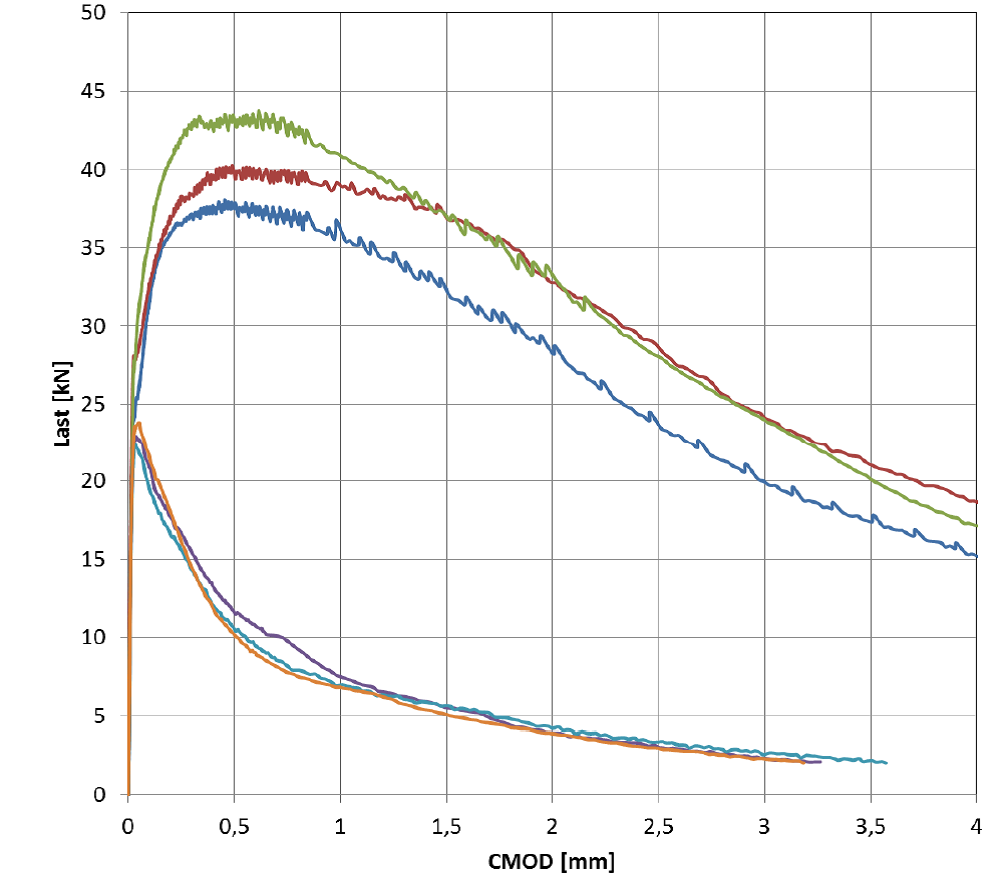 In this particular test shown above, the short steel fibres behave quite well, while the other type of fibre would not be suitable for CRC. Even though ductility is an integral part of the behaviour in CRC we don’t really use it directly in our calculations. Crack-control, however, is important for e.g. durability, for deformations and for aesthetic reasons. Ductility is also part of the reason for the kind of behaviour that we see in in our cold-bending tests (link).

As we have to sell our products every day we cannot just be satisfied with finding the type of fibre and the fibre content that gives us the very best material performance. If that was the case Bache already achieved excellent results back in 1986/87. We have to find the best compromise between performance and price in each case (with a certain minimum performance required J) in order to be competitive – and performance also relates to workability, where some of the fibres that will provide good mechanical properties give a very poor workability (something I will address in a later post). In order to stay on top of this we have tested many different types of fibres in the past – and will continue to do so in order to stay up-to-date with recent developments.

The work we have done over the years in this field also means that we prefer to be able to decide for each project, which type of fibre and which fibre content would be most suitable. This sometimes brings us at odds with specifications that dictate a certain minimum content of fibres without taking aspect ratio into account (fibre length divided by fibre diameter). We are always ready for a discussion – but unfortunately, this is not always the case for the specifier. Let us know if you have encountered something like this in the past – or if you prefer simple rules that are easy to relate to? Or if you have comments or questions? This has been a (relatively) short description of some of the elements we look at with regard to ductility, but I still hope it has been of interest.