As a precast producer it is very important for us to have a good way of connecting elements – preferably so that we can count on full transfer of moments, torsional stresses etc. The joints should be short, simple and have a strength at least equivalent to the elements that are joined together. This allows us to divide the structure into smaller parts in the manner, which makes the most sense with regard to transport, installation, handling on site and in the factory as well as with regard to reducing the cost of moulds. Examples are complicated staircases like e.g. Per Aarsleff or the one below or larger structures like the Catharina bridge, where element size could be chosen sensibly without a lot of restrictions.

For the staircase, straight ø16 mm bars were connected with a 100 mm joint and for the Catharina bridge a 550 mm joint was used for ø25 mm bars. 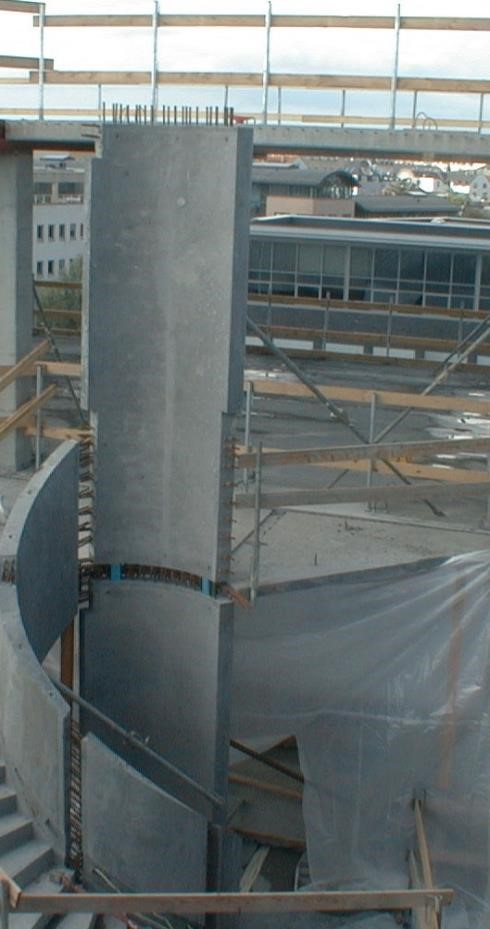 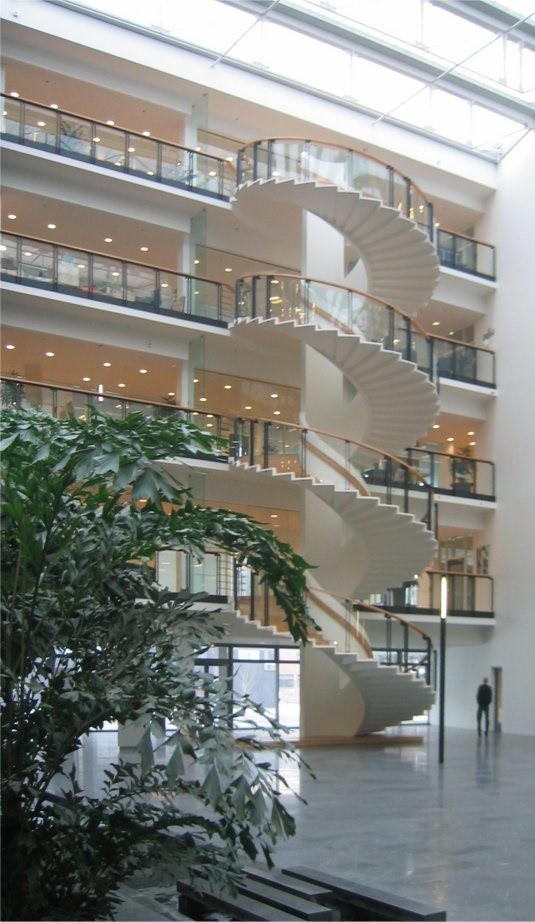 Helical staircase during installation –
and after 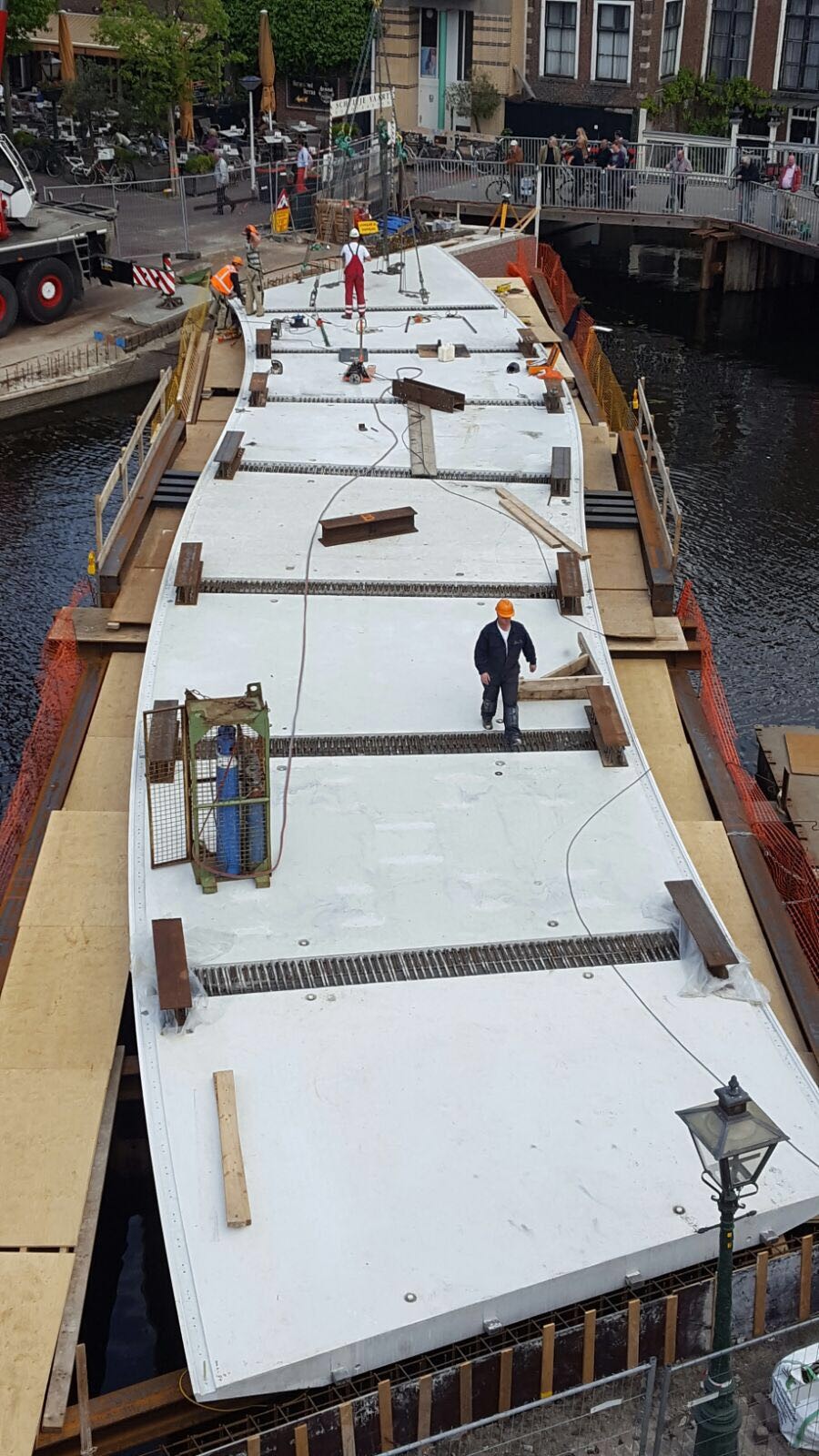 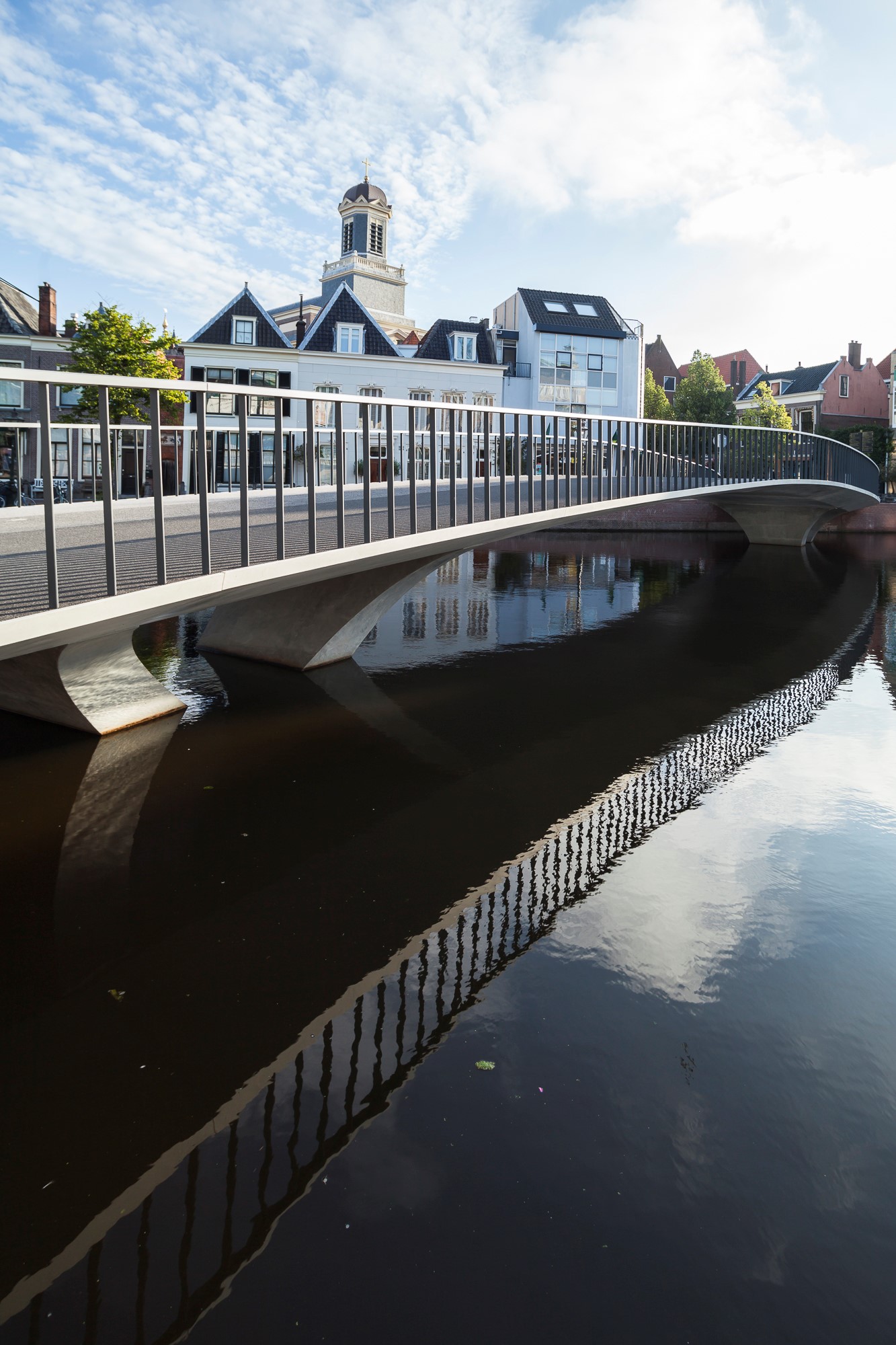 This is possible using CRC JointCast – a dry-mortar similar to the CRC i2® that we use in the factory. CRC JointCast is available in small bags so that only water and steel fibres have to be added, when the mortar is mixed on site. The fibre content in CRC JointCast is a little higher than in our other mixes, to ensure that we can achieve full anchorage with a lap length of 5-10 bar diametres. This combination of a very high steel fibre content that provides ductility and high tensile strength with a concrete that is strong and has dense packing with very fine particles ensures excellent bond to rebars. As strength development is very rapid (120 MPa in 3 days) it is often possible to have full capacity of a joint in just a few days.

CRC JointCast was documented in the late eighties and early nineties and the first applications were carried out in 1995. The first large-scale application was 2 new buildings for Aalborg University (a total of 15,000 m2), where the CRC JointCast was used to connect flat slabs, so that the finished system acted as a continuous slab cast on site. Other applications were for bridges, for extending columns and beams, connecting shear walls or simply for repairs or retrofit. As the joints are small only 3 m3 of CRC JointCast was necessary for adding an extra lane to a 100 meter bridge in a project in Odense, Denmark. The bridge connections were developed further in a project at Chalmers University, where the joints were designed to be easily sealed in the bottom. The joint width in the tests was 100 mm – nominally – for ø16 mm bars, but lap length in some of the tests was as low as 65 mm. Also in these tests full capacity was achieved – and in each case the joint was designed to be at least as strong as the elements that were connected.

A conventional joint on top – and the CRC joint below

CRC JointCast has been available on the market since 1995 – but apart from the earlier mentioned applications, the main application today is actually for our own products. It has been difficult to pin-point the areas where a material of this type provides the most benefit, so at the moment it is used to connect staircases, bridges and large beams and columns, but as mentioned mostly for our own projects. Others could be inclined to think that this is because we want to keep knowledge of this type of joints to ourselves to provide a competitive advantage in our projects, but this is really not the case – we are just not very good at marketing and selling CRC JointCast! Part of the challenge is identifying building systems or projects where this type of jointing system could benefit contractors and precast producers by making installation easier and the final product more durable. This could change, however, if some of the practices that have been developed in North America for bridges catch on in Europe.

In North America more than 130 bridges have been produced with this type of jointing system over the last 7-8 years and Ben Graybeal and his group at Federal Highway Administration have published extensively on field-cast UHPC connections between prefabricated bridge elements and related topics:

The advantages of this system will hopefully also be recognized for projects in Europe – eventually – and when they do we will be ready with the perfect jointing material - and we will make sure that it is no secret :-).